For the past week, I’ve been anxiously awaiting the premiere of Adam Goode’s documentary ‘The Final Quarter.’ I’m a Sydney Swans supporter, but I’ve always had a soft-spot for Goodsey. His deftness and natural ability on the field was always thrilling to watch. When he sadly retired after 372 games, I was devastated.

However, it wasn’t until I watched The Final Quarter last night that I understood the magnitude of racial abuse Goodes endured during his final years as a professional AFL player.

In the years leading up to his retirement, Goodsey’s career was tainted by racist remarks on and off the field, with the final straw being a 13-year-old girl calling him an “ape”. Goodes received backlash for calling out the young girl, in front of tens of thousands of spectators during a match between the Swans and Collingwood. But if he didn’t stand up, who was going to?

Some said the adolescent’s naivety was the reason for her actions, but the young girl’s bigotry comment was unfathomable for many Australians. This was now the “Face of racism” as Goodsey remarked, and a true eye-opener to how casual racism had become.

But as Goodes came to terms with being labelled a primate, handling himself eloquently during every interview, Australia assumed he was ok– and we forgave and forgot. In the following days and weeks, the fast news-cycle meant that we turned the page of the paper and ultimately turned our back on Goodes.

The most pivotal scenes from the documentary came from racist claque Eddie Macguire, the president of Collingwood, Andrew Bolt, a critical social and political commentator and TV and radio personality Sam Newman.

Their intolerant and disgusting comments weren’t just scary because of how blasé they were uttered– they were horrendously frightening because these three bullies hold immense power in the primetime media space.

Their words have, unfortunately, shaped a discourse that incites prejudice and declares casual racism as harmless– Or to put in Eddie’s words, “A slip of the tongue.” In all honesty, can we be shocked that a 13-year-old girl yelled “ape” from the stand, when we allow white, privileged men to speak on behalf of the Torres Strait Islander and Indigenous community?

Another alarming aspect of this documentary was how this was not a one-off event. Boos from the crowd and ongoing racial slurs from influential figures went on for three years.

Goodes is a proud Indigenous man who speaks with integrity about his culture and heritage. But after three years of continuous harassment and racial vilification, it would be hard not to question your identity and sense of self. And to make matters worse, Goodes was not able to grapple with these complex issues in the privacy of his own home– he dealt with it win the spotlight and while the whole of Australia watched on.

My biggest question, upon watching the critically acclaimed documentary was: where were our leaders? For three, extremely long and painful years, this oppression lasted, and no one stood up.

If we look back at the U.S presidential campaign, Australians were shocked over Trump’s victory in becoming America’s president, a win that still today is incomprehensible. When he declared his building of the wall, we shook our heads in disgust. But what might be more abhorrent, is that we are building a wall in our own backyard– a divide that sees an ‘us versus them’ mentality especially concerning minority groups, be that ethnic, LGBQTI or refugees.

So, what have I taken away from this must-watch documentary? Three critical things:

1. We need more representation and points of view from minority voices. How are we supposed to address prevalent social justice issues with all-white discussion panels, limited perspectives and ignorance? Because if we want to move forward for an all-inclusive Australia, biased opinions exclaimed by mediocre, middle-aged, white men should have no place on our screens, radio’s and everyday life.

2. Speak up. Of course, the racial abuse was tear-jerking, but what saddened me most was how absolutely no one came to Adam Goode’s aid. There were countless times when leaders had the opportunity to support Adam Goodes on a national platform, yet they disparaged his cries, and instead of treating Adam as the victim, he was demonised and painted as the villain. As a society, we need to stand up for marginalised individuals, be it in sport, schools, universities and the workplace.

3. Complacency has no place.  The Final Quarter explores and challenges undercurrents of racism in Australia and serves as a reminder about how we need to reconsider our complacency surrounding these discussions. It should be an educational tool and must-watch documentary for everyone.

While I can never fully comprehend the immensity of racial discrimination experienced by Adam Goode’s, I am grateful he has been able to use his voice to start the conversation Australia needed to have. So, let’s talk about it. 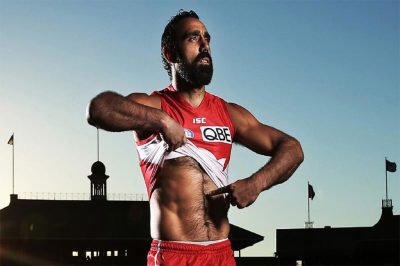