My last article surrounded R U OK Day, and explored the idea of personal resilience.

This week I want to discuss how we can build organisational resilience– in other words, “Burn the Boats”. This idea stems from military history, surrounding the concept of moving forward and not retreating.

There’s an old story from 1519, where Spanish conquistador, Hernán Cortés led his army to the shores of Mexico in the hopes of overthrowing the Aztec Empire. Upon arrival, he did something remarkable and quite strange; he instructed his men to burn the same ships they’d arrived in.

Why? Because when you burn the boats, you burn your options. You can no longer go back the way you’ve come. You either go forward and succeed or you stand still and die.

This is an extreme example, but when I look back to both my professional and personal challenges over the last 20 years, I have certainly applied this way of thinking to both.

In early 2000 after leaving the Victoria Police, I took on the role of training the security guard force at the Sydney Opera House. This was during the aftermath of 9/11, and the War on Terrorism had begun. A ‘No War’ sign was painted on the sails of the Opera House.

‘No War’ on Sydney Opera House– Image via specialistheightaccess.com.au

We had to look at security and critical infrastructure and national icon protection from a completely different angle. We had to ‘Burn our Boats’, forget about previous ways of protecting assets and security training.

So we introduced intelligence-driven security and liaised with various policing and intelligence services to examine the threat from a new perspective.

A part of any risk assessment approach is looking at the capability of any likely threat actors that may present. In this particular case, it was terrorism and the threat it placed against places like the Sydney Opera House that was a potential site of the attack as a national icon.

A venue operating multiple performance theatres, it garners 10.9 million visitors each year and also employs thousands of people. Therefore, we had to consider the health and safety of every staff member and performer.

The concept of introducing a 24/7 security guard force, access control systems and countermeasures at a performing arts venue was initially met with hostility. This increased scrutiny made it difficult for performers and staff to go about their daily business.

The solution was to engage and meet with the Sydney Opera House executive and staff. This way, we could explain why we were doing what we were doing and address any concerns they had.

Without support from the staff, we would never have been able to add extra security measures that were required to secure and protect the Opera House adequately.

We moved away from a position of dominance, to one of support and cohesion. This relationship is also exhibited in the military space, where engagement with local forces is commonplace.

Support from your executive and staff is pivotal when making your business resilient. Including them in the decision-making process additionally allows them to be a part of the solution.

It wasn’t just the security team who ‘Burned the Boats’, it was also the staff, who adopted new daily routines.

When looking at any resilience project within your business, consider involving all facets and people in the company. I learned a lot by doing this and certainly made new friends and work colleagues along the way.

Go ahead ‘Burn your Boat’, move forward and don’t look back. 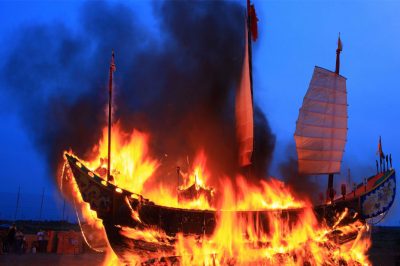